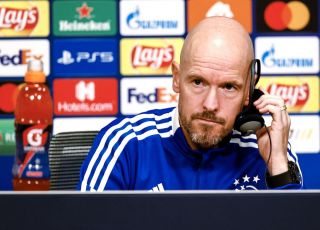 Manchester United are facing competition for the signature of Erik ten Hag, with the Ajax coach seemingly high in demand following his sparkling spell in charge of the Dutch giants.

Despite a deal with Man Utd looking advanced, there were suggestions last week that German outfit RB Leipzig were getting ready to hijack the Old Trafford club’s bid to sign Ten Hag.

These suggestions have now been eased, with fresh reports claiming that Manchester United are confident of landing Ten Hag.

That’s according to The Telegraph, who state that despite Leipzig’s apparent effort of hijacking the deal, United remain confident of getting the deal over the line.

United are said to be working through the finer details of the deal but an announcement is not expected to be made before Ajax take on PSV in the KNVB Cup final on Sunday.

SN’s verdict on Leipzig’s hijacking attempt…
Several reputable outlets are reporting that Leipzig are interested in Ten Hag but after registering their interest early, United shouldn’t find it too difficult to conclude a deal to sign the 52-year-old.

In Ten Hag, United have a golden opportunity to tie one of the most exciting coaches in Europe down. They missed the boat on Jurgen Klopp and Pep Guardiola, a scenario they’ll be desperate to avoid this time around.

Mauricio Pochettino has also been heavily linked with the job and he probably would’ve been the favourite two years ago but the pendulum has swung Ten Hag’s way in recent season.