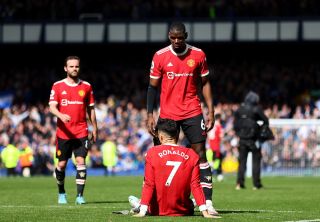 Manchester United’s season is unraveling and it’s beginning to get ugly for Ralf Rangnick’s side. Just one win in their last five Premier League games means that Champions League football next season is highly unlikely.

If Europe’s fine dining table wasn’t already out of reach prior to this weekend, the 1-0 defeat to Everton was certainly the final nail in United’s coffin as they were comfortably overturned by Frank Lampard’s struggling side.

Everton were supposed to be the side fighting to stay in the division but the roles were reversed last Saturday. At least that’s what former Crystal Palace and Brighton star Glenn Murray thinks.

The forward was scathing in his assessment of United, arguing that you never quite know which side of United you’re going to see when you watch them.

“I know Everton are in a terrible run of form and they’re probably in a false position in the Premier League, but Goodison Park is not a good stomping ground for Manchester United,” he told Premier League Productions, via The Express.

“You just don’t know what Manchester United team is going to turn up. I get bored of the noises coming out of Old Trafford, whether it be Harry Maguire or De Gea’s comments or tweets about apologising to fans. We’re talking about the basics of modern-day football of working hard, trying and fighting.”

“I’ve been in relegation teams and that is the minimum you’ve got. You might not have the quality that other teams possess, but the least you can do is try your very best. I just feel as though this squad isn’t doing that and that is the most disappointing thing I think from the Manchester United fans’ point of view.”

SN’s verdict on Murray’s comments…
You’d struggle to find a Manchester United fan who doesn’t agree with Murray on this one. United look worse than they have ever done in the last 10 years and that’s not going to be accepted by the fans.
Unfortunately, it looks like the players are fine with it. A new manager is going to walk through the door this summer and supporters will be desperate for him, whoever it may be, to shake things up. One thing’s clear – a major clearout is needed.