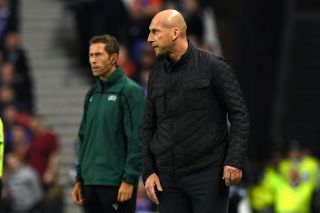 Jaap Stam has made it clear that he wants to return to Manchester United, amid suggestions that Erik ten Hag might ask him to be part of his backroom staff at Old Trafford.

The former defender is on a list of potential recruits with a United-Dutch background in order to help Ten Hag settle once announced as manager.

The others include Robin van Persie, Steve McClaren and Rene Meulensteen.

Stam believes he owes a lot to United and it would be a popular choice from Ten Hag to bring him back.

“In principle, I am open to any role at Manchester United,” Stam told Voetbal Primeur. “I have enjoyed working and living there, and I owe a lot to the club.

“If I can help Manchester United in any way, I’m open to it, provided it’s a role that suits me.”

Stam played for United between 1998 and 2001 and, on top of that, he has gained some coaching experience since hanging up his boots in 2007. He was sacked by MLS side FC Cincinnati back in September after previously managing PEC Zwolle, Jong Ajax, Reading and Feyenoord.

However, after selling Stam to Lazio, Sir Alex Ferguson went on to say that the former PSV defender had lost a yard of pace, which influenced his decision.

Although in Gary Neville’s autobiography, Red, the former right-back explained how he felt when the news of Stam’s future was announced to the squad.

“Jaap Stam was sold which was a bombshell as big as Sparky leaving, even for the players – especially for the players. We were as mystified as anyone. All kinds of conspiracies swirled around because Jaap’s exit came on the back of his ‘controversial’ autobiography, but I’ve always believed that the book was a minor factor, perhaps irrelevant.”

Let us know in the comments section if you would like to see Stam back at the club in a coaching capacity?