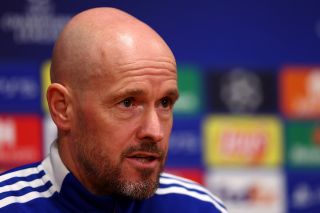 Manchester United are without a manager as things stand but Ajax coach Erik ten Hag is the heavy favourite to take over from Ralf Rangnick at the end of the season. The 52-year-old has one year remaining on his contract in Amsterdam but could be prized away from the Dutch giants.

Mauricio Pochettino has also been strongly linked with a move to Old Trafford but the pendulum has swung Ten Hag’s way in recent weeks.

Last week, journalist and transfer specialist Fabrizio Romano explained why Ten Hag hadn’t signed his deal at United yet, revealing that several details needed to be straightened out before he put pen to paper.

Now, there are more encouraging reports from a Manchester United perspective. According to The Athletic, negotiations are progressing between the club and Ten Hag.

Ten Hag is thought to be considering other options as well, including a new contract proposal from Ajax but a move to United remains the likeliest outcome.

Furthermore, a decision from the talented coach is now said to be close. Upon making his decision, dialogue between Ten Hag and United over a contract is expected to pick up.

A formal announcement before this weekend is not expected, however. Ajax face PSV in the KNVB Cup final on Sunday so any official word would have to wait.

SN’s verdict on United’s chase for a new manager…
It’s common knowledge now that Ten Hag is the club’s preferred target and they will be desperate to get that over the line as soon as possible.

Tottenham’s farcical search for a boss last summer proves how damaging an extended period without a manager could be and the Old Trafford hierarchy would likely look to avoid that.