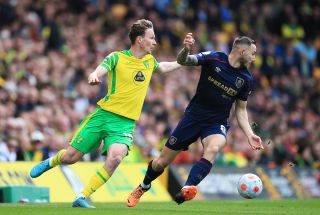 It may not be over mathematically, but Champions League football next season is looking increasingly unlikely for Manchester United.

The defeat at Everton means that with just seven games remaining of the season, and with tough games against Liverpool and Arsenal upcoming, Ralf Rangnick’s side needs to win all of their games to stay in the conversation.

Next week’s game is slightly more forgiving, however, with relegation-bound Norwich set to make the trip to Manchester for an important game in their bid to stay in the division.

Norwich star Kieran Dowell commented on the trip to Old Trafford following their 2-0 win over Burnley on Sunday, confidently backing his side to leave the Theatre of Dreams with all three points.

“Seven points away from Everton and now they’ve got some tough fixtures coming up and we’ve got some we think we can win so you never know,” he said.

When asked about his side’s chances of beating United next week, the answer was short and sweet: “Yeah, I reckon we’ve got an upset there,” the midfield said, according to talkSPORT.

SN’s verdict on Dowell’s comments…
Spirits weren’t high among United supporters prior to this weekend’s game at Everton and despite the Merseyside club’s torrid form, large sections of the Old Trafford faithful were still not confident United would bring all three points home.

And they were proven right after yet another turgid performance so Dowell can’t be blamed for saying it how it is. Norwich are more than capable of pulling off an ‘upset’ – especially if their performance in the December game at Carrow Road is anything to go by.

Dean Smith’s side were superior for most of the game and lost narrowly through a late goal – a scenario they’ll be desperate to avoid again as they fight to stay in the Premier League.