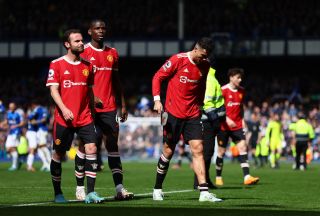 The end of the season is approaching and it’s culminating in a horrifying climax for Manchester United, who went into the season with great hope and expectation.

Instead, it’s the worst-case scenario for Ralf Rangnick’s side as they go through the motions for the final few weeks in a scrap for the final Europa Conference League qualification spot.

Top-four qualification through the league was already unlikely by the time Atletico Madrid made the trip to Old Trafford but exit that night ensured that entry into Europe’s fine dining table would be a big ask.

According to fresh reports, some Manchester United players have been disgruntled by the number of days off granted following that 1-0 loss to Diego Simeone’s men.

That’s according to The Athletic, who say that there has been grumbling among players over the number of days off, which came out at nine out of 13 for some players.

Players were given a five-day break immediately after the defeat, with players not going on international duty then offered another four days away before returning on Tuesday, five days prior to the 1-1 draw with Leicester.

Read more: Norwich star confidently backs his side to win at Old Trafford

United are claimed to have hosted a behind-closed-doors friendly with Blackpool that day but some players held reservations about going full throttle over fitness concerns.

Rangnick also used the extended break to take a vacation in Barbados and the German is said to have missed one training session upon the players’ return, with Chris Armas and Ewan Sharp leading training.

SN’s verdict on the report…
If there was ever a time to double down on training sessions and hammer some discipline into these players, it would’ve been after that game against Atletico Madrid.

Diego Simeone’s men displayed a flawless away performance in the Champions League and ensured qualification to the next round with ease. United rolled over and looked out of ideas after 30 minutes.

United didn’t play the following weekend so some time off would’ve been granted either way but if the reports are to be believed, the mini-vacation was a huge overleap.