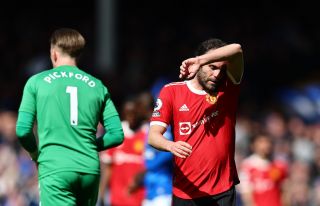 Another weekend, another 90 minutes of gutless, uninspired football from this group of Manchester United players. Ralf Rangnick must be wondering what he’s got himself into.

Prior to his appointment, it was common knowledge that the Manchester United squad is an odd one. And not in a positive way. But not even Rangnick, who has been labeled as ‘the professor’ of German football, could have seen this coming.

Manchester United look like pretenders every week and it was no different this time against the worst Everton side of the last 60 years. At the risk of overcomplicating a simple issue, we take a look at three things we learned from the 1-0 loss at Goodison Park.

Erik ten Hag has his work cut out for him.
It’s not quite official yet but everything points to Ten Hag becoming Manchester United’s next permanent manager. The Ajax coach is regarded as one of the most talented in Europe but one thing’s for sure – he needs to oversee a major clearout when he takes the reigns at Old Trafford.

Many of the players in the squad have bags of talent, that’s undeniable. But as the old saying goes, hard work beats talent when talent doesn’t work hard. And the talent at Manchester United never works hard.

Players with their heads elsewhere.
Rangnick is only in the job for roughly another month but still, with his two-year advisory role coming up, you’d think he wants to plan for the future. Paul Pogba, who is almost certain to leave the club for nothing this summer, is a constant in his team and recently, Juan Mata has entered the fold.

Read more: The next Man Utd manager has an uncontrollable wildfire at his hands – opinion

Nemanja Matic doesn’t have a future at the club and the same goes for several other players. There’s no point in sticking with these players when they’re not going to take part in the club’s future. Instead, blood the exciting youngsters.

Fred’s injury leaves Man Utd with zero capable midfielders.
Scott McTominay was ruled out ahead of the game and Donny van de Beek is on loan at Everton. Fred is Manchester United’s best midfielder and Rangnick was generous with his praise of the Brazilian hours before kick-off.

A first-half knock prematurely ended his evening and United are now left with Paul Pogba and Nemanja Matic to fill the McFred-sized hole in the team.

If that second half is anything to go by, it’s only going to get worse as we get closer to the end of the season. Truth be told, neither of those players come close to Fred or McTominay.