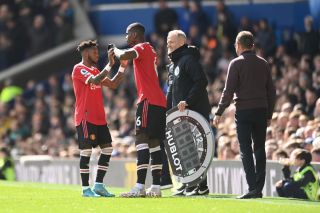 It’s one win out of the last five in the Premier League for Manchester United following their dire 1-0 defeat to Everton on Saturday. The home side were 17th in the league prior to the game and have now been handed a huge boost in their bid for survival.

The result all but ends United’s push for a top-four finish and focus will soon begin to turn to the next permanent manager, whoever that may be. But until then, the current squad will go through the motions for another month before wrapping up this disappointing season.

One player who can’t be blamed for any of this is Fred – the Brazilian is staking a claim for being United’s most important player but Rangnick was dealt a heavy blow on Merseyside.

Read more: (Video) “You almost nutmegged me!” – Pogba and Ferdinand joke ahead of Everton vs Man Utd

The midfielder was substituted in the first half and the interim boss has now provided an update on the situation.

“Fred had some muscular problems on his hip flexor,” Rangnick said after the game according to the official Manchester United website. “We already are without McTominay. Without both defensive midfielders, it isn’t good for us.”

SN’s verdict on Fred’s potential lay-off…
Rangnick didn’t specify whether Fred will miss a large chunk of what’s left of this season but muscular issues are rarely short-term problems. Fred’s absence would’ve been a huge blow if United had anything to play for but as things stand, they don’t.

United have a tricky run-in but if they genuinely want to secure a place in next season’s Europa League, they’ll need Fred in the middle of the park.