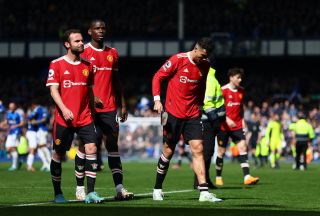 Manchester United’s terrible run that is. It has gone so bad that we can forget about the top four now, which is the reason I think Ralf Rangnick should dump a lot of these players over the coming weeks and give the kids a go.

Everton scored the first-half and United were unable to respond as the game finished 1-0 at Goodison Park.

You won’t find a single United fan who enjoys watching this team play. They couldn’t even beat a relegation struggling Everton side. In fact, they didn’t show up at Goodison.

It was abysmal again.

Check out our player ratings below:

The deflected goal was hardly his fault, but De Gea denied Richarlison with a great save later on. Had little to do as Everton scored with their first shot after 27 minutes.

Gave Richarlison too much respect in the build-up to Everton’s goal.

It wasn’t his worst performance. The skipper was unfortunate with Gordon’s shot that deflected in off him, but he won most of his battles.

Hardly an upgrade on Raphael Varane but did alright.

Hot and cold performance, which is what you expect from a squad player.

Too soft in his challenge on Alex Iwobi for the ball that ran to Gordon when he scored the game’s only goal. He doesn’t have the legs anymore.

Lasted 35 minutes before coming off with a knock. A headless chicken.

I can’t find a single positive from his performance today.

The low rating is not for a lack of effort, but Ronaldo didn’t get enough service from his teammates today. He was often the only United player inside the box.

Made Pickford work twice in the first-half before being switched to the other wing. I didn’t agree with subbing him off today.

Apart from being booked, Pogba have no impact whatsoever when he came off the bench.