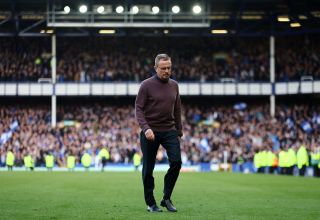 Manchester United were back in action this weekend as they made the trip to Merseyside to face struggling Everton, who sit just above the relegation zone.

Frank Lampard’s men were in dire need of three points to halt their freefall into the Championship, with Manchester United also looking to close the gap on the Champions League places.

Just three points separated Manchester United from the final Champions League spot prior to today’s game but still, this group of players couldn’t turn up. They couldn’t even pretend to care. The 90 minutes at Everton were appalling and a slap in the face for each and every one of the traveling supporters.

I could waste your time and debunk Ralf Rangnick’s tactics and why his side was so glum and didn’t deserve to be on the same pitch as 17th-placed Everton but that is pointless.

Rangnick won’t be in the dugout in two months and the next man, whoever that may be, will be made to put out an uncontrollable wildfire. There’s also no point in going after individuals – after all, this is a team sport and the team is completely dysfunctional. In truth, most, if not all, of those players will still be at the club next season.

If today was bad, it’s only going to get worse from now until the end of the season. With top four almost mathematically out of reach, players going through the motions with very little regard for the supporters is going to be common practice.

Rangnick isn’t innocent in all of this, even if he walked into a job under the worst possible circumstances. Perhaps he didn’t quite realise what kind of mess United were in when they sacked Ole Gunnar Solskjaer after three years.

The German has failed to implement any kind of style over his five months at the club and the side looks worse than it did in the final few weeks of Solskjaer’s tenure.

One thing’s for sure – things won’t improve this season. The only thing left to do as a supporter is praying that the club makes the right decisions behind the scenes and sorts this mess out.