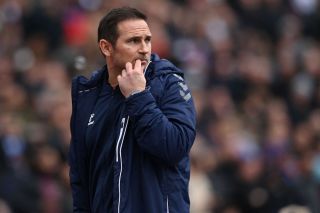 Everton are discussing the possibility of sacking Frank Lampard if they lose to Manchester United at lunchtime.

That is according to Football Insider, who claim the Toffees are plotting a last ditch move in a desperate bid to avoid relegation.

I have always felt that Lampard gets an easy ride in the press, especially when you consider the willingness from pundits to back him whilst in charge at Chelsea, yet the same pundits would make a mockery of Ole Gunnar Solskjaer during his time in charge.

So, part of me hopes that we give Lampard his marching orders today. It was a risky appointment and he has not got the results they need to stay in the Premier League.

On top of that, from a Manchester United perspective, Donny van de Beek hasn’t pulled up trees since moving to Everton on loan. Ralf Rangnick still believes the midfielder can revive his career at Old Trafford under the next manager.

However, from speaking to United fans, I don’t think many are confident ahead of kick-off. We have been so poor this season that fans can see a regelation struggling side tip us over at a time we need three points!

Let us know in the comments if you think United will get the win later today.