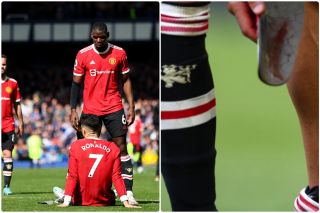 Cristiano Ronaldo was left wounded after a disappointing game at Goodison Park, with Manchester United losing more ground in the race for top four.

Pictures at full-time show Ronaldo had a nasty gash on his leg which left blood stained on his shin pad.

Ronaldo looked frustrated out on the pitch, devoid of any service, but he had a few chances which came to nothing.

The Athletic’s Laurie Whitwell tweeted after the match about Ronaldo limping off the pitch following the full-time whistle.

Probably the most dispiriting display of the season. Just nothing – against such a vulnerable Everton team. #MUFC

The pictures below may help explain why…

Cristiano Ronaldo's leg after his afternoon at Goodison 👀 pic.twitter.com/tRCep1kq0I

It doesn’t look serious enough to keep Ronaldo out of action for a sustainable period, so we should see him in the starting line-up next week against Norwich City.

That said, I think Ralf Rangnick should play the kids for the rest of the season.

Or players who will definitely be at United next season.