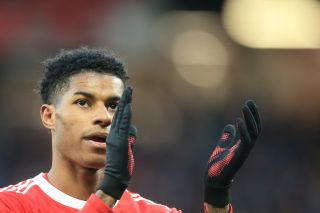 Although we don’t care about Everton here at Stretty News, the stakes for Frank Lampard are even higher.

The Toffees have been beaten eight times in 12 matches and reports suggest that another defeat today, against Manchester United, could see Lampard axed at Goodison Park.

However, Ralf Rangnick’s side have won only three of their last 11 games in all competitions. That needs to change later today if we are to have any chance of getting into the top four this season.

Rangnick has named his starting eleven to take on Lampard’s relegation struggles.

David de Gea starts between the sticks, but I expect there will be doubts over his future when Erik ten Hag is announced as the new manager.

Aaron Wan-Bissaka and Alex Telles will occupy the full-back roles, with Harry Maguire and Victor Lindelof pairing up in central defence.

In midfield, we have Nemanja Matic returning to the line-up, starting alongside Fred and Bruno Fernandes.

Up top, Cristiano Ronaldo will lead the line, while Jadon Sancho and Marcus Rashford attack from the flanks.

It looks like a 4-3-3 formation after the line-up was confirmed by @ManUtd, as seen below:

Here's your #MUFC team to take on the Toffees! ✊#EVEMUN