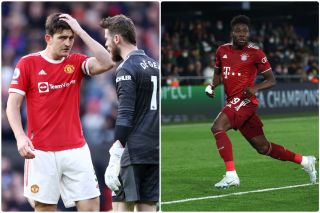 In a Twitch stream where he was playing FIFA 22, Davies opened a pack on Ultimate Team before unlocking Maguire.

This seemingly set the Canadian off.

“And you refer to him as ‘yes cap’. I don’t know what he says to him. Bro. I’m not dissing Harry Maguire but Ronaldo… Ronaldo should get the armband man.”

The clip has been shared on YouTube, as seen below:

To play devil’s advocate here, in attempt to stand up for Maguire who has been getting criticised from every corner this season, Davies needs to learn that this isn’t FIFA but real life.

Why would United switch captain midway through the season and give the armband to a 37-year-old striker who could leave in the summer? It is not something I expect Ralf Rangnick to do before the end of the season.

A lot of the criticism Maguire gets is deserved, but this is proof that he is being painted as a joke figure within the football community, which is very harsh.

Hopefully Maguire puts in a good performance against Everton today, like he did last week, versus his former club Leicester City.