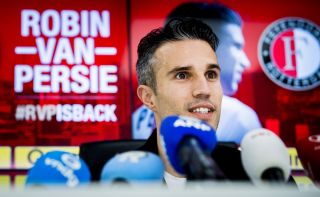 Robin van Persie has turned down an opportunity to work under Erik ten Hag at Manchester United, according to reports. The former striker has ventured into coaching following his retirement three years ago but has reportedly rejected the chance to seal a return to Old Trafford.

Erik ten Hag is likely to take the reigns at Manchester United this summer, with the Dutchman currently leading the race to become Ole Gunnar Solskjaer’s permanent successor.

Links to the current Ajax coach has sparked speculation over the incoming backroom staff, with Van Persie thought to be one of the names under consideration.

It doesn’t seem like that is going to happen, however, with Dutch outlet ESPN Netherlands, via Soccer News, claiming that Van Persie has turned down the proposal.

As per the report, Van Persie is happy with his current role at Feyenoord and is not looking to make a move elsewhere as things stand. Furthermore, his son’s enrolment in the club’s youth academy is said to have been a deciding factor.