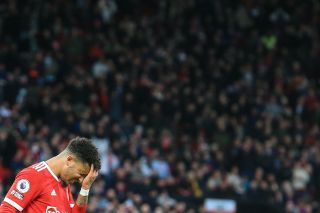 Manchester United will be looking at keeping their top four hopes alive when they take on Everton in the Premier League at Goodison Park on Saturday afternoon.

The Reds go into the game on the back of a disappointing 1-1 draw with Leicester City at Old Trafford last weekend, whilst the Toffees were defeated 3-2 by Burnley midweek.

Cristiano Ronaldo is widely expected to return to the starting eleven to face Everton after missing last weekend’s draw, whilst Marcus Rashford could also be handed a start.

Everton have endured a miserable season this far and currently find themselves loitering just above the relegation zone. The Toffees’ luck hasn’t changed much since Frank Lampard’s arrival back at the end of January and, with the club in disarray, United couldn’t have picked a better time to play them.

The return of Ronaldo should help a lot too. We looked toothless last week without him.

It’s been a bitterly disappointing season so far but all is not lost yet. Finishing in the top four is nothing to be celebrated, but if United can get over the line and secure Champions League football for next season it would end the season on a positive note and give the Reds fans much needed hope and optimism going into next season.