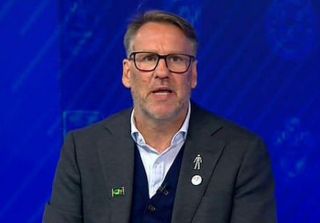 Paul Merson doesn’t think a lot of the current Manchester United team. It’s been a terrible season where we’ve gone from title hopefuls, right at the very beginning, to top four dreamers.

The Sky Sports pundit has highlighted danger for the Red Devils ahead of their clash with relegation strugglers Everton this weekend.

This won’t please United fans, who still hope the team can finish in fourth place and secure Champions League football for next season, but maybe a year in the Europa League will help us build to a point we can compete in Europe’s biggest competition?

There’s a lot of work to be done with the squad – not to mention our main source for goals is 37-years-old – and it looks like Erik ten Hag will be announced as our new manager next week.

But Paul Merson doesn’t believe the current team under Ralf Rangnick will beat Everton this weekend, which would certainly put an end to our pursuit for Champions League football next season.

“Everton’s next few games are absolutely atrocious and I think they’ll probably get relegated if they lose this one, as Burnley’s run-in looks a lot simpler on paper,” he wrote in his Sportskeeda column.

“After this game, they have Leicester twice, Liverpool, Chelsea and Arsenal to play till the end of the campaign along with other teams.

“You can call me mad, but I can see the Toffees getting all three points here.”

Let us know in the comments section if you have concerns about facing Everton this weekend?