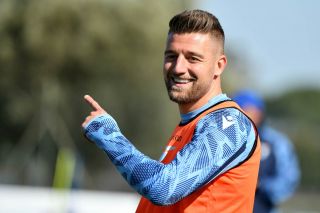 Manchester United are set for yet another busy summer after spending north of £130m less than a year ago. Following the sacking of Ole Gunnar Solskjaer earlier this season, widespread changes are expected to be made in United’s core squad.

The side’s midfield has been a cause for concern for several years and after failing to recruit a midfielder last summer, it looks like strengthening in the middle of the park is a priority this time around.

Kalvin Phillips and Declan Rice have both been linked with a move to Old Trafford but Lazio midfielder Sergej Milinkovic-Savic is the latest to be tied with a big-money transfer to the Theatre of Dreams.

That’s according to Italian outlet Corriere dello Sport, via Sport Witness, who claim that the Roman club are looking to offload Milinkovic-Savic in a bid to overhaul their squad.

Furthermore, Manchester United are said to be in ‘pole position’ to secure the Serbia international’s signing, with the player also expected to push for a move away.

SN’s verdict…
It’s not the first time Milinkovic-Savic has been linked with a move to United and it certainly won’t be the last. The 27-year-old is undeniably one of the most talented players in Italy but it remains to be seen whether United would be willing to spend north of £60m on a player in his late twenties.

Homegrown players are trending and although they may come with a premium, it’s fair to believe that Phillips, Rice, and Jude Bellingham are more attractive prospects.