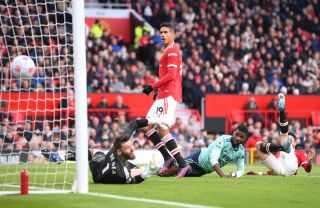 Manchester United have been dealt an injury blow ahead of their match against Everton at Goodison Park.

Ralf Rangnick has revealed that the Red Devils will be without Raphael Varane, Luke Shaw and Scott McTominay.

Those three will join Edinson Cavani in the treatment room and miss the trip to Merseyside.

Varane has been injured quite a bit this season which will come as a concern to coaches at the club, but Shaw faces a lengthy spell out (couple of weeks at least) to have metal bolts removed.

Meanwhile, McTominay misses out due to a foot problem.

Shaw had metal bolts inserted after breaking his leg in 2015 and he picked up a knock in last week’s 1-1 draw against Leicester City.

The good news is that Cristiano Ronaldo will be back to lead the line after returning to training this week.

“Cristiano is back again,” Rangnick told reporters, as per the Manchester Evening News. “Luke is still injured, we had to take him off at half-time (against Leicester), he’s had his problems with his leg where he had the operation in 2015.

“The doctor told me they decided to remove two metal bolts in his leg and this will happen tomorrow and he will be out for the next two or three weeks.

“Cavani is still injured, Raphael Varane is still injured and will be missing out again tomorrow and the same is true for Scott McTominay, he’s having problems with the sole of his foot.”

Everton are relegation strugglers this season and it’s a must win game for United if we are to have a chance at finishing fourth in the table.