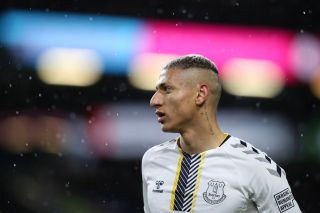 Manchester United are set for a busy summer and they could be looking to bolster their forward line amid uncertainty over Cristiano Ronaldo’s future at the club.

The 37-year-old has one year remaining on his deal at Old Trafford but could be looking to leave the club if they fail to qualify for next season’s Champions League.

Everton are fighting for survival in the Premier League and in the event of relegation to the Championship, they run the risk of losing some of their top players at cut-price deals.

Frank Lampard will be desperate to keep Richarlison beyond this summer but the Brazil international is their most important player and is bound to attract interest from other clubs.

According to Sport Witness, Manchester United are one of two clubs to make contact with the Merseyside club, with Real Madrid also registering an interest.

It is, however, specified that no official approach has been made for his transfer and that both clubs are ‘mapping the market’.

SN’s verdict on Richarlison potentially joining United…
There are a lot of factors to consider with this one. Manchester United don’t have a permanent manager yet. Erik ten Hag is likely to take the reigns this summer but nothing’s for certain.

The club is unlikely to make any moves without the incoming manager’s approval and most of that will also depend on whether Ronaldo stays around for the final year of his contract.

Reinforcements should be expected, however. Anthony Martial is likely to depart permanently whilst Edinson Cavani will leave on a free transfer. Mason Greenwood remains unavailable and there are concerns over Marcus Rashford’s form.

A move would make sense for all parties, especially if Everton succumb to relegation.