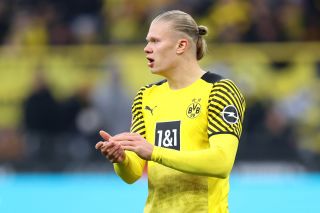 Erling Haaland is one of the most coveted players in Europe and will be in high demand this summer, with the Norwegian superstar expected to leave Borussia Dortmund.

The 21-year-old has been in sparkling form since his 2020 move to the German club and has attracted interest from all top European clubs, with United also said to be interested.

There are now, however, reports that Haaland has dismissed any interest from the Old Trafford club due to concerns they won’t be able to match his ambitions.

Furthermore, it’s claimed that United indicated to Haaland’s representatives that they would be able to match any offers tabled to them by other clubs.

That’s according to ESPN, who add that Haaland’s next club will be decided on their ‘sporting project’ and not where he can make the most money.

Haaland’s decision to snub United is said to have come before they made a breakthrough in talks with Erik ten Hag to become the club’s next manager.

SN’s verdict on Haaland snubbing United…
It’s no secret that Haaland is one of the best players in the world and truth be told, it would take quite the effort from United’s recruitment department to convince the Norwegian to sign. The forward has the world in the palm of his hands and could easily choose his next club.

With a new manager set to walk through the doors at Carrington, another rebuilding job is underway and marquee signings of this magnitude are highly unlikely.