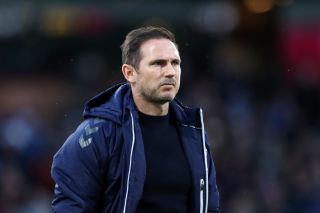 Manchester United are back in Premier League action this weekend as they look to rescue what’s left of this season in a final push for the last Champions League place.

United are currently sitting in seventh place, three points behind fourth-placed Tottenham Hotspur. Ralf Rangnick’s side make the short trip to Goodison Park on Saturday, with the home side in dire need of three points in their bid to stay in the division.

Frank Lampard is under increasing pressure to keep his side in the Premier League and the Englishman has confirmed a double boost for his team ahead of this weekend’s showdown.

“We’ve got Seamus Coleman – who on Wednesday night was feeling the effects of not being well and wasn’t fit to play – in consideration, so that’s a nice boost for the game tomorrow,” Lampard said in his pre-match press conference according to the Liverpool Echo.

“Fabian Delph is in the squad and is fit and available. Yerry Mina we hope will be fit for Leicester (on April 20).”

SN’s verdict on this weekend’s clash…
It goes without saying but Saturday’s encounter is a must-win game for both teams. If Manchester United are serious about clinching that final Champions League position, they need to be flawless for the rest of the season – starting with three points at Goodison Park.

Failing to qualify for the Champions League would put a huge dent in the next manager’s ability to work freely and limit his resources.

Everton are at the opposite end of the table but they will draw inspiration from the 1-1 draw at Old Trafford earlier this season. United were toothless and the Toffees were unlucky to not return home with all three points.

Coleman’s return, as read above, is a timely boost for Lampard whilst Delph has enjoyed stellar performances against United in the past.