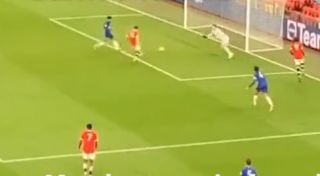 The 17-year-old scored his sixth goal at the Theatre of Dreams this season with a match winning finish against Chelsea U23s tonight.

It’s been a brilliant week for Garnacho, after returning from his first senior international call-up to the Argentina squad, having trained with United’s first team at Carrington. On top of that, he put pen to paper on a sponsorship deal with Nike.

The winger has impressed in the FA Youth Cup this season and will be sure to play a key role in the final against Nottingham Forest.

For the goal, as seen below, D’Mani Mellor squared the ball to Garnacho, who couldn’t miss.

We don’t have any footage from MUTV as they can’t show the game until 10pm – as it wasn’t televised due to some ridiculous broadcasting rule, but at least one fan @MUFC_Youth at Old Trafford recorded the goal and shared it on Twitter.