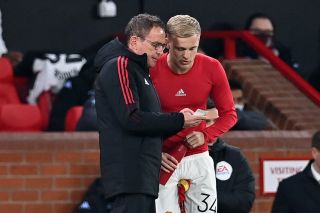 The Netherlands international excelled under Erik ten Hag at Ajax, and it’s the worst kept secret in football that he will soon be the manager at Old Trafford.

“Why not?” Rangnick said, as per the Guardian.

I mean, being sent to a relegation struggling side was no easy task, but Van de Beek willingly went to play more football. It may be a concern to some that he hasn’t exactly pulled up trees during his short spell at Everton.

Rangnick said: “But it also depends on the new manager and the way he wants to play and for Donny that is what he told me in conversations we had together.”

Since he is still a United player, Van de Beek is ineligible to play at Goodison Park on Saturday. That might give manager Frank Lampard a selection headache, but his players are expected to come at us like wild dogs, tomorrow.

“We cannot afford to drop points,” the interim manager added. “I think everyone is aware of that.”

If we drop points tomorrow, we may as well forget about top four. United have had countless chances to secure fourth spot but we’ve thrown far too many away.

Now we are in a race with bottlers – Arsenal and Tottenham. Is this our new level?