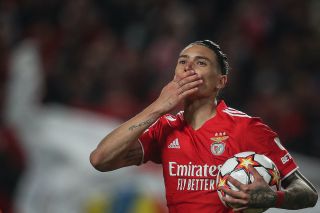 Manchester United have been linked with a summer move for Benfica striker Darwin Nunez, so it is interesting to see him change his agent prior to the transfer window.

Fabrizio Romano shared Nunez’s tweet about his current agency agreement, with the 22-year-old set to sign with a new representative, amid links to Manchester United (via Telegraph).

The Italian journalist pointed to how interest has been gathering from ‘top clubs’, with United said to be a potential destination for the highly rated Uruguayan striker.

Many top clubs want him – Benfica turned down €45m bid from West Ham on DeadlineDay in Jan. https://t.co/emNa2duki0

Whether United will be an active part of the chasing pack remains to be seen. Other reports suggest Harry Kane is a primary target this summer and there’s no way the next manager will get both.

A lot will also depend on Benfica’s asking price, but Portuguese newspaper Record (H/t Sport Witness) claim the player has a £124m release clause. The Telegraph article mentioned above suggests United could sign Nunez for £60m, though.

Moreover, according to Jacque Talbot, Nunez is set for a move to the Premier League.

He adds that the player now has an agreement with Jorge Mendes and Eugenio Lopez, who will both represent him in the future.

Exc: Darwin Núñez will be heading to the Premier League in the summer. Jorge
Mendes signed an agreement with agent Eugenio Lopez and both of them will represent the striker in the UK. Plenty of clubs interested.

Nunez has scored 31 goals in 35 games for Benfica this season.