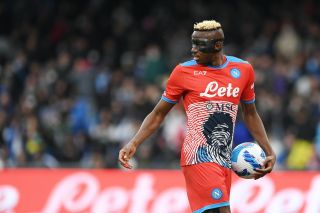 Napoli striker Victor Osimhen would reject a move to Arsenal if Manchester United were to try sign him in the summer.

The Nigerian has impressed since joining the Serie A side from Lille in 2020 – scoring 25 goals in 55 games. He netted 10 times in his debut season and has 15 to his name in the current campaign.

According to Corriere dello Sport journalist Antonio Giordano, Osimhen would reject a move not only to Arsenal but Newcastle United, if United came forward with an offer.

“Osimhen is followed by half the world and it is true that Newcastle showed €100 million in January,” Giordano said, as quoted by TEAMtalk. “But, in my opinion, if the English club returns, the Nigerian will not go.

“In the personal imagination of a 23-year-old player, United are a temptation and if the Red Devils can reach certain figures, history reaches us those certain operations must be done.

“Otherwise, you find yourself as in the case of Allan, who was about to go to PSG and never went there. At certain figures it is madness not to sell.”

Even without guaranteed Champions League football, Europe’s top prospects want to come to Manchester United, which is incredible news for the next manager.

What about Harry Kane?

The Athletic claim Harry Kane is curious to see what United offer this summer following reports of interest from Old Trafford.

This comes down to whether the new manager wants to sign a fully blossomed centre-forward or a 23-year-old with potential to be one of the best.

Kane is a proven Premier League goalscorer but his issues with ankle injuries down the years may cause concern, with Tottenham likely to demand a big chunk of our transfer kitty in order to secure their captain’s signature.

Let us know in the comments who you would like United to sign ahead of next season?