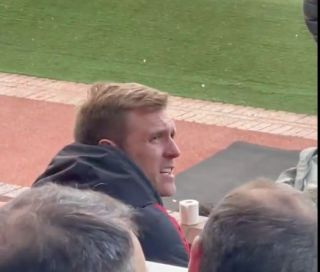 It got heated at Old Trafford last weekend when Manchester United were held to a 1-1 draw against Leicester City.

A Manchester United supporter has spoken out about his row with technical director Darren Fletcher on the subs bench.

Jamie Caplan, 25, spoke exclusively to the Manchester Evening News about the incident.

Caplan shouted towards the bench after Kelechi Iheanacho opened the scoring at Old Trafford. He was frustrated by the lack of effort and fight shown by the United players, but the dig wasn’t aimed specifically at Fletcher.

“He’s [Fletcher] the one who took offence and turned around and asked me who the f*** I was and to sit down. That’s when I went back at Fletcher because I took that very personally.

“I then went into a bit of a rage, so he didn’t say much then. And then Scott McTominay turned around. I couldn’t make out what he was saying because I was already walking up the stairs by this point.”

Highlight of the game fletcher and a fan going at each other – missed half of it #mufc #MUNLEI pic.twitter.com/vbJoMmCFRB

He added: “As a matchgoing fan, I put a lot of money into the club, I go watch them a lot.

“‘Where’s the f***ing fight? You don’t care.’ That’s pretty much word-for-word what I said.

“He didn’t like it. But he can’t be in denial, he was there. He knows the standards that are required to be top-level.

“He was in a dressing room with Roy Keane and if he turned around to me and say that’s a good enough United side then he’s a liar and I don’t believe him.

“Just look at all the old pros, they all say the same thing, it’s just not there, the desire. It isn’t there.”