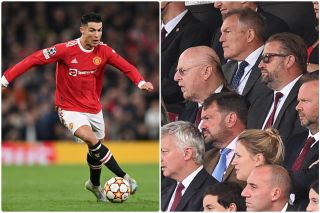 Cristiano Ronaldo could be on his way out of Manchester United following speculation over a move to the MLS, with the Glazer family trying to cut their wage bill.

Despite scoring 18 goals for a struggling side this season, the 37-year-old has been the subject of criticism from supporters and mainstream media.

It hasn’t quite gone as planned for Ronaldo, but his struggles have been exaggerated by the masses. Like making a mountain from a molehill.

However, it sounds like the Glazers want to call time on Ronaldo’s time at United, just one year into his contract.

Ronaldo’s deal will have another year remaining at the end of the season, but with the likelihood of United missing out on Champions League football, a transfer could be on the cards.

Calciomercato journalist Stefano Benzi said on CMIT TV: “From my American correspondence I learned that there’s already the replacement of Gonzalo Higuain who could be none other than Cristiano Ronaldo.

“There’s a lot of negotiations underway to bring him to MLS, it would be a welcome destination not only for the player, who would have been convinced to leave Europe.

“There’s an important possibility of going to Miami with David Beckham, who has preferential channels with Manchester United. The Americans who manage the Red Devils would gladly get rid of Ronaldo’s salary.”

Ronaldo remains one of the best strikers in world football and he’d find the MLS a walk in the park, even at his age, but it’s a telling sign that the Glazers are getting cold feet over his mammoth wage package.

It will be interesting to see if the next manager attempts to keep Ronaldo at the club for another season.