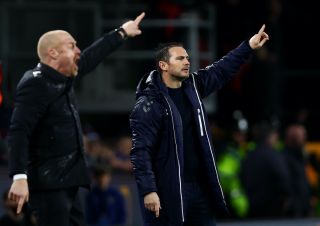 Everton suffered one of their most detrimental defeats of the season on Wednesday night when fellow relegation strugglers Burnley won 3-2 at Turf Moor.

Richarlison, who has been linked with a summer move to Manchester United, scored a brace but it wasn’t enough as Nathan Collins, Jay Rodriguez` and Maxwell Cornet gave the Clarets all three points.

The result leaves Everton just one point above the drop zone and this weekend they host United at Goodison Park.

But with eight points from our last five Premier League matches, United are still showing poor form and it’s no wonder that we’ll have nothing to show for this season.

Top four is slipping away but the Red Devils should be trying to keep their hopes alive with a win on Saturday.

Speaking to BBC Sport on Wednesday night, Everton manager Frank Lampard said (via The Mirror): “We have to keep working and preparing and give everything. Because if we do make mistakes like we did tonight we better be ready to fight. That’s what it is.

“Players don’t need to listen, or read, or get involved in anything other than turning up tomorrow and getting right for Saturday and trying to get the right results to keep us in this league.

“The only thing we can do is control what we can. Which is to work and fight and get the results. We’re just above the zone so if we didn’t know we were in a fight before then we certainly know now.

“There are nine games where we have to give absolutely everything. I will certainly do that and everybody has to do the same. It doesn’t feel nice tonight, but we have to understand we have a game in three days’ time.”

United’s upcoming opponents are fighting for Premier League safety. Our players need to be up for a battle, even though Burnley managed to beat them.