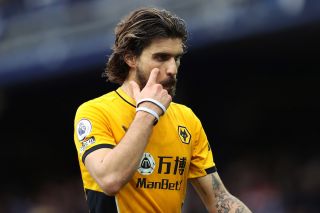 Erik ten Hag is the clear favourite to take over from Ralf Rangnick this summer, with the club preparing to appoint their first permanent manager since Ole Gunnar Solskjaer replaced Jose Mourinho in 2018.

The Dutchman has been heavily linked with a move to Manchester United and there have been reports that an interview between Ten Hag and the club has already been held.

Manchester United have struggled in midfield for several years now and despite splashing the cash on signings over the last five years, the problem has not been solved.

According to reports, Ten Hag has identified Wolves midfielder Ruben Neves as the solution to United’s worries through the middle, with the Portugal international expected to move on from the Midlands club this summer.

That’s according to The Sun, who claim that Ten Hag has been a huge fan of the former Porto star, and would push to complete a move to bring Neves to Old Trafford.

Read more: Mauricio Pochettino yet to be ruled out by Man Utd in managerial chase

Furthermore, it’s claimed that United made an attempt to sign him in January but were rebuffed by Wolves, who made demands of £40m and upwards.

Neves’ desire to play in the Champions League could tip the scales in United’s favour and Cristiano Ronaldo, team-mate with Neves on international level, is also mentioned as a potential factor in the deal.

SN’s verdict on United’s interest in Neves…
It’s not the first time United have been linked with the Wolves star and it certainly won’t be the last. Although Neves is a highly rated midfielder in the Premier League, there are question-marks over his suitability as a defensive midfielder.

Neves does, however, have two years remaining on his contract at Wolves and if United could pull of a discounted deal, he would certainly improve the squad.

Nemanja Matic and Paul Pogba are both expected to leave the club and there are doubts over Donny van de Beek’s future, which could open up space for Neves to join.