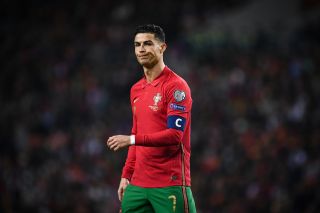 Despite scoring 18 goals for a struggling side, the 37-year-old has been the subject of fierce criticism from supporters and media.

The former Real Madrid and Juventus superstar has now been urged to leave the club by BBC columnist Garth Crooks, who argues that joining forces with David Beckham in the USA would prove to be a ‘formidable partnership’.

“Old age comes to us all but its impact can be more visible in some than others,” Crooks told the BBC. “Ronaldo has scored an impressive 18 goals in 32 matches in all competitions this season but it is a far cry from his usual high standards of almost a goal every game when he was playing for Real Madrid.

“I am a huge admirer of Ronaldo. His professionalism is beyond reproach and he has more than fulfilled the expectations required of a 37-year-old player in the toughest league in the world.

“However, he is still a young man who needs a purpose in life. The United States might be the place to establish that purpose.

“David Beckham and Ronaldo would make a formidable partnership in Miami. One thing is for sure, the five-time Ballon D’or winner doesn’t need the money.”

SN’s verdict on Ronaldo’s future…
It hasn’t quite gone as planned for Ronaldo in his comeback season but his struggles have been exaggerated. 18 goals in 32 games for possibly the worst United side in modern history is an impressive feat and nearly unprecedented at his age.

Furthermore, he has popped up with vital goals when his side needed him, particularly in last year’s Champions League group stage. He might not run as much as the other players but he never did much of that 15 years ago either.

Ronaldo remains one of the deadliest players in front of goal and with one year remaining on his contract, United would be wise to capture that ability to score goals and take advantage of it for another season.

One thing’s for sure – United’s chances of winning silverware are greater with the Portuguese at the club. I don’t think he has an appetite for the MLS quite yet either.