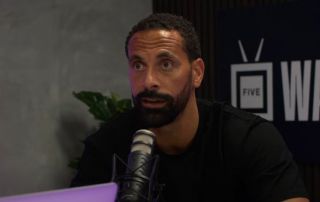 The former Manchester United and England defender has turned his hand to punditry in recent years, like many of his teammates, and at times he can be critical of players.

Ferdinand is not only a regular on BT Sport for their Champions League coverage, but he also hosts a YouTube show called Vibe with Five.

According to The Sun, a number of the current England squad feel as though Ferdinand is ‘too strong’ in his criticism on his YouTube channel.

It is noted in the article that players don’t have problems with criticism from the likes of Roy Keane or Gary Neville, but they feel Fernandes goes overboard.

However, Ferdinand has gained a reputation for being strong in his criticism, especially towards Phil Jones, although Ferdinand issued an apology to his former teammate at Old Trafford.

He made some harsh comments about Jones, claiming the centre-back should leave on the club on a free after struggling to become fully fit. The comments didn’t go down well, with Ole Gunnar Solskjaer jumping to Jones’ defence, calling out Ferdinand for his remarks.

“I think Rio was a bit out of order. He should have called me about why he wasn’t playing,” Solskjaer said, as per Manchester Evening News.

“Phil is a no fuss, get on with it type of guy. I think that’s out of order completely. He is still not 30, but he puts his body on the line and he has never done anything but give everything for the club. Rio of all should know more. He just gets his head down, a proper, proper professional.”

I have no doubt in my mind that some of the England players complaining about criticism also play for Manchester United.