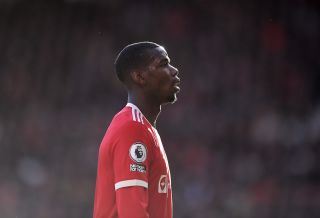 Paris Saint-Germain have identified Manchester United midfielder Paul Pogba as one of their targets for the upcoming transfer window, according to reports.

The 29-year-old midfielder is out of contract this summer and looks set to finally leave the club, having flirted with the idea of exiting Old Trafford for the last four years.

The Frenchman has often cut a frustrating figure since his record-breaking return to Manchester United in 2016 and is likely to leave on a free transfer this year.

Juventus have been linked with a move for Pogba but according to reports, he has emerged as a summer target for Paris Saint-Germain. That’s according to Le Parisien, who add that the French giants will also be looking to add Monaco midfielder Aurelien Tchouameni to their squad.

PSG are keen to downsize their squad so departures would be necessary for the pair to arrive and another potential stumbling block is that Pogba is said to prefer a move back to Juventus.

Pogba has rejected all chances to commit to a long-term at Manchester United, which more or less confirms that a permanent departure is looming large.

SN’s verdict on Pogba’s future…
In truth, Pogba’s six-year stay couldn’t have gone much worse. For several of those campaigns, he spent months on the sidelines through injury or on the bench. Pogba is undeniably a talented player but it just didn’t work out for him at United – perhaps his first spell at the club was a hint.

At 29, the next contract he signs is likely going to be his final big one and Manchester United would do well to avoid that. They’ve made a habit out of overpaying their underperforming stars and tying Pogba up for another four years could backfire.