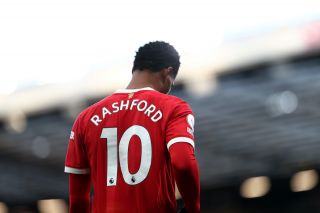 A novel idea for sure if you hadn’t bothered to observe Marcus Rashford’s performances over the last 18 months. Rashford has been a listless shell of a footballer who looks desperately unhappy on a football field. Running into blind alleys and failing to make even the most obvious off-the-ball runs into goalscoring positions. He is an unrecognisable melancholic young man compared to the beaming, effervescent Roy of the Rovers figure who burst onto the scene to pick up a stumbling outfit under Louis van Gaal.

Old Trafford had the hometown hero centre forward it had been looking for decades.

Since then, however, there has always been a sense of unfulfilled anticipation about Rashford. Everyone waiting for him to kick on and become the next great English footballer. Since returning from shoulder surgery though, his future looks uncertain and the unthinkable prospect of him plying his trade elsewhere, is now a distinct possibility.

But would a move elsewhere be beneficial for Rashford? And is he good enough to merit first team football at an equivalent quality team of even better?

Looking at Rashford’s numbers suggest that Rashford may not command the place in an elite team he desires.

These are a good progression of numbers for a good footballer, and indeed his statistics for key passes and dribbling suggest a very good facilitator of other attackers.

Nevertheless, these are not the numbers of an elite level forward who would walk into any team. Recent gossip columns have linked an openly unhappy Rashford with Arsenal. But where does he play in that team?

It’s become apparent that Rashford’s strengths do not lend themselves to playing as the lone number 9 in Arteta’s 4-2-3-1 system and his form of the last 12 months have him nothing more as backup to Saka, Martinelli and Emile Smith-Rowe. Three players who are younger, with more upside and greater integration into Arteta’s tactics.

Moreover, Rashford has had ample opportunity to prove himself under Rangnick and has flattered to deliver. His 75 minutes in the first leg of United’s Champions League tie was a tragic display. The effort there but the quality had entirely deserted him.

With the likes of Kylian Mbappe and Erling Haaland very much up on the marketplace this summer, his previous suitors on the continent will likely have seen enough of Rashford to direct their attentions and resources elsewhere. What options Rashford thinks he has, are no real improvement on where he is now. Playing second or third fiddle at Arsenal or Barcelona is no good for Rashford’s career when he is at such an important crossroads, both on and off the pitch.

The great sadness of this situation is that it is not one of Rashford’s making. His initial entrance into the United consciousness was electrifying but as time has gone on, it has become apparent, he simply was never the footballer our expectations foisted upon him. At his best, he is very good rather than great.

This is not a criticism; very good players make great players greater still and help form great teams. When those very good players have grown up at the club, they are invaluable to forging a nucleus for a successful outfit. There is a place for Rashford as a key player in United’s future should he want it, and the club fulfil their end of the bargain by acting like a serious institution rather than an expensive clown car.

Understandably the grass looks greener for both Rashford and the legion of his critics among my fellow reds right now. But if we were to cut through the noise that always surrounds United, Rashford’s options away from his home are moves that would do his career more harm than good.

2 responses to “Opinion: Outside of Old Trafford, Marcus Rashford’s options are thin”