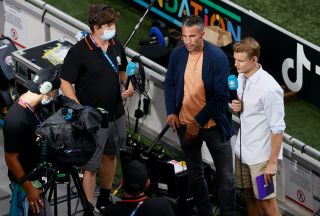 A lot has been written about Erik ten Hag in recent months.

Two weeks ago, Stretty News revealed that following Ten Hag’s first meeting with the club, it became clear that Robin van Persie was being considered as potential former player to work alongside the current Ajax manager as part of his backroom staff.

We also noted that former United and England defender Rio Ferdinand put himself forward for the role, but club officials were unconvinced. That may explain why he reacted so bullishly to the story – questioning our sources, who are well placed.

Since then, Robin van Persie has been linked with a return to Old Trafford. Not only by The Times but The Mirror, too.

Van Persie has not tried to downplay the story like Ferdinand. He clearly doesn’t feel the need to save face.

The truth always finds a way of coming out Rio, you should know that champ… pic.twitter.com/5XVcjU35lD

One insider noted: “methinks he doth protest too much…”

However, former academy graduate Luke Chadwick has thrown his support behind the idea of Van Persie coming in to work with Ten Hag.

In an exclusive interview with Caught Offside, he said: “I think it certainly helps having a player of Robin van Persie’s popularity at the club coming in to support the new manager. It sounds like a good idea.

“Something needs to change at United. The club have gone backwards since last season when they finished second in the league and then lost the Europa League final. Now they were knocked out of the first knockout round of the Champions League, and are struggling to get in the top four. There’s a lot of work for Ten Hag to do, but I think it would be a popular decision, especially with Van Persie there too. Let’s hope it’s given time to build a new dynasty at the club.”