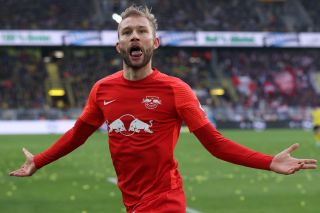 It was a big mistake by Manchester United not to sign a defensive midfielder last summer.

It was a choice that didn’t help Ole Gunnar Solskjaer when he was dismissed in November.

The attacking players we signed were clearly held back in a team failing to control matches, leaking goals and losing 50/50 battles all over the pitch.

So, it goes without saying this summer, Manchester United need a defensive midfielder.

According to The Athletic, it will cost £150m to prize Declan Rice away from West Ham. United need to step away from the England international and look to more sensibly priced options.

German newspaper BILD this week suggest United and Tottenham Hotspur are eyeing up a move for Austria international Konrad Laimer, who has just one year remaining on his contract at RB Leipzig.

Ralf Rangnick signed the Austrian for the German side in 2017 and he has gone on to make 149 appearances for the club.

My problem with this is, are we signing a player Rangnick wants or has he been chosen by the next manager?