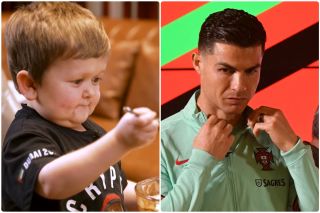 TikTok sensation Hasbulla, 19, has aimed a dig at Cristiano Ronaldo as his ongoing feud with Abdu Rozik drags on.

Hasbulla sat down with Barstool Sports and took aim at the Manchester United star. He also claims to be a bigger name, or more famous, than the five-time Ballon d’Or winner who has over 400 million followers on Instagram.

He criticised Ronaldo’s style of play, too.

“I could not care less about Ronaldo. I am more famous than him,” Hasbulla said.

“The only thing he does in a match is pass around the ball.”

You may be wondering what has triggered Hasbulla into launching an attack on Ronaldo.

Well, Ronaldo was pictured alongside Hasbulla’s arch-rival Abdu Rozik at Old Trafford a few weeks ago.

Hasbulla will be calling Ronaldo out in the octagon next as he fancies himself as a MMA fighter.