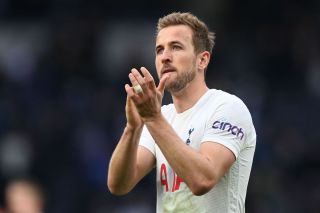 Manchester United look set to make a move for Harry Kane this summer.

With Edinson Cavani leaving at the end of the season when his contract expires and Cristiano Ronaldo’s future up in the air, it is believed that United see Kane as one of their primary targets for the upcoming transfer window.

Tottenham Hotspur kept their star striker last year despite significant interest from Manchester City, so it was inevitable that Kane would be linked with an exit again this year.

However, City manager Pep Guardiola appears to be targeting Borussia Dortmund Erling Haaland this summer, as per Eurosport.

After some questionable form at the start of the season when he looked disinterested, Kane has turned things around under Antonio Conte. The Italian manager doesn’t look very happy at Spurs and there has been lots of speculation over him potentially walking away from the job.

Jack Pitt-Brooke wrote the following: “Manchester United certainly want him this summer and the England captain, who has not committed his long-term future to Tottenham, would be curious to hear them out.”

It is unlikely that United will be able to offer Kane Champions League football next season, unless Tottenham and Arsenal completely fall apart in the race for top four, but there will be lots of excitement when a new manager is announced.

Former Tottenham manager Mauricio Pochettino has been linked with the United job and he has a brilliant relationship with Kane.