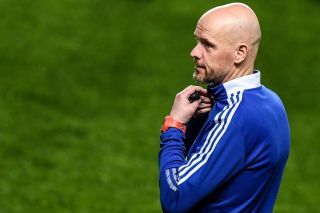 There has been a breakthrough in negotiations between Manchester United and Erik ten Hag’s entourage, with the 52-year-old Dutchman closing in on a coveted move to Old Trafford.

Ten Hag has been heavily linked with a move to the club since Ole Gunnar Solskjaer was sacked last year and finally looks set to be confirmed as the next permanent manager imminently.

Earlier on Wednesday, ESPN broke the news that Manchester United were poised to finalise the appointment of Ten Hag, who is on the verge of securing the Eredivisie title with Ajax.

Journalist and transfer specialist Fabrizio Romano has now jumped on the news and doubled down on the claims, adding that although it’s not finalised just yet, the deal is getting there and is a work in progress.

Manchester United board are pushing on Erik ten Hag as new manager, as per @MarkOgden_ – agreement not completed yet but talks are ongoing on staff, budget & more 🔴 #MUFC

SN’s verdict on the exciting news…
Manchester United were running the risk of letting their hunt for a manager drag on and disrupt their pre-season preparations, similar to how Tottenham Hotspur went about matters last year.

Fortunately for supporters, it looks like the deal will be wrapped up with plenty of time to spare and Ten Hag was the preferred choice for many fans.