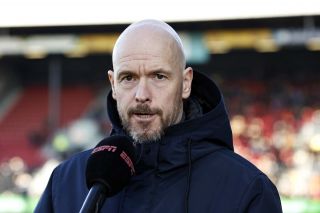 Erik ten Hag is one of the favourites to become Ole Gunnar Solskjaer’s permanent successor this summer, with the Ajax boss looking likely to leave the Amsterdam club.

The 52-year-old is regarded as one of the best coaches in Europe and has been interviewed by Manchester United regarding the vacant position – a role he’s believed to be going head-to-head with Mauricio Pochettino for.

According to The Independent, Ten Hag outlined a five-year plan in his initial interview with Manchester United officials, which suggests that he is preparing for long-term rehabilitation of the club – should he get the job. Following a number of tumultuous years since Sir Alex Ferguson’s departure, a set long-term plan could be the way forward.

Albeit the Dutchman is the supporters preferred choice, and overwhelmingly so, there are concerns within the Manchester United hierarchy over Ten Hag’s suitability.

As per the report, Ten Hag did not make a ‘100% iron-cast case’ in his initial interview with the club. Tottenham’s managerial search last summer is referenced in the article, with the London club reportedly having had concerns over his charisma – an area Pochettino came out on top.

Interestingly, Ten Hag is also reported to have spoken about transfer targets in his interview, with some players believed to currently be playing in Amsterdam.

Ajax defender Jurrien Timber, 20, was linked with a move to Old Trafford earlier this week. The defender is a regular for club and country and is contracted to his club for another three years.