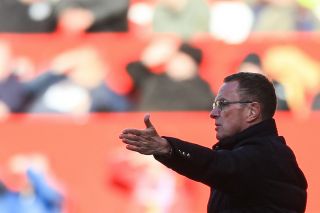 Speculation this morning suggests Austria want Ralf Rangnick as their next manager.

According to Austrian newspaper Kurier, sports director Peter Schottel flew to Manchester for a meeting with Manchester United interim manager on Monday, and it is understood that he tried to convincing Rangnick to step into international management.

Austria are looking for a new manager after Franco Foda announced that he would step down from the role following last week’s friendly against Scotland. They also lost to Wales in a World Cup qualifying play-off.

The report adds that Rangnick has made no decision on whether he will take the Austria job, but he is scheduled to take up a job as an advisory with United, although the details on this have yet to be formally announced by the club.

Moreover, United have been linked with a move for Austria international Konrad Laimer

The Mail claims Rangnick will only work six days per month as a consultant for United, so it would be possible for the German coach to fit both jobs in because international management doesn’t take up as much time.

Obviously, I would like Rangnick to focus on United but it doesn’t sound like his job will be hands on by any stretch of the imagination.

Let us know in the comments if you would be disappointed to see Rangnick try juggle two jobs while under contract at United.