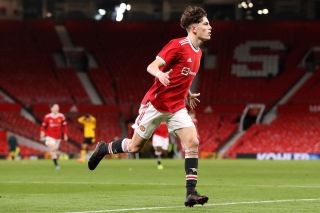 Manchester United youngster Alejandro Garnacho trained with the senior squad this week as he continues to work his way up the ranks at Old Trafford, having impressed since he joined the club in 2020.

Garnacho joined the club from Atletico Madrid in 2020 and has emerged as one of the most impressive figures in the academy set-up, earning himself a call-up to the senior Argentina side last month.

The 17-year-old winger didn’t feature for his country but will be hoping to make his senior debut at club level before the end of the season after he was spotted training with United’s first-team squad.

The dead-rubber against Young Boys last year aside, Ralf Rangnick has been reluctant to use players outside Ole Gunnar Solskjaer’s first-team bubble, with Anthony Elanga being the only exception so far.