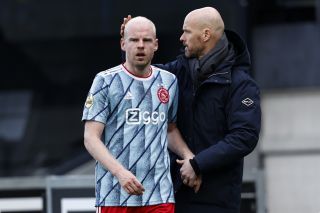 Well, maybe secretly he does, but the former Everton star is doing his utmost to persuade the Dutch manager to stay in Amsterdam.

Ten Hag is the favourite to become United’s next manager this summer – when Ralf Rangnick will move into an advisory role – and a second meeting has been scheduled this week in London with his entourage. He has led Ajax to two Eredivisie-KNVB Cup doubles as well as a remarkable run to the Champions League semi-finals in 2019.

In contrast, United have not won a single trophy in five years. Ten Hag will be the one tasked with changing that if he is appointed manager at the end of the season.

Klaassen has told Dutch outlet VoetbalPrimeur that he cannot understand why Ten Hag would consider leaving Ajax for United.

“He can also stay. I hope so,” Klaassen added, with Ten Hag under contract at the club until 2023.

Klasseen simply doesn’t want to lose one of Europe’s top up and coming managers.

Ajax are in contention to win their domestic title again this season and that would be the perfect goodbye gift for Ten Hag.