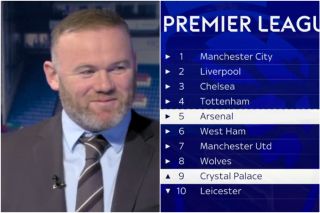 Wayne Rooney has ruled Manchester United out of the race for top four.

The former United and England striker reckons Tottenham Hotspur will have the edge of Arsenal after their 3-0 defeat to Crystal Palace on Monday night.

With Tottenham in fourth, Arsenal fifth, West Ham sixth and United seventh  – many Reds are arguing that our season was over in March. They are right because finishing fourth in the league is hardly an achievement for United.

However, on Monday Night Football, Jamie Carragher and Rooney discussed the race for top four.

None of the teams involved have shown anywhere near enough consistency this season, but Arsenal can have no excuses because they haven’t had any European football.

“I think it is between Arsenal and Tottenham,” Rooney added on Sky Sports. “I have looked at Manchester United’s form and I don’t think they will make an impact, but I have to give the upper hand to Tottenham as they have the slightly more favourable fixtures.”

"It's almost like no-one wants that fourth place!" 😅@Carra23 and @WayneRooney discuss the race for top four 💭 pic.twitter.com/x4dHziuJFc

On the other hand, Carragher thinks Arsenal are in pole position for the final Champions League spot, saying: “I think it’s a bad night for Arsenal. The way they’ve lost not just the three points.

“It’s very important they don’t panic or there is no hysteria. They’re in a really good position, a better one than Tottenham and Manchester United.

“They’ve just won five games away from home on the bounce, we’re talking 15 out of 18 points. You would take out of the six games away from home. The worry is that this could happen another two or three times with teams taking encouragement from the way Palace played.

“I think it will be a real boost for Tottenham and United. They shouldn’t panic, they’re still in a really good position. They’ve got a really good away record the last couple of months and I am sure that is what Mikel Arteta will be reiterating, Don’t panic, there is still a long way to go.”