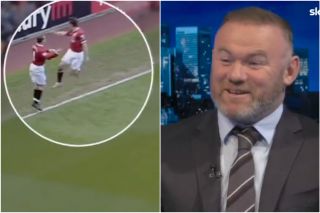 Neville wasn’t in the studio when Rooney jokingly out forward an underwhelming suggestion for the ‘highlight’ of the right-back’s career.

With Jamie Carragher in his usual spot, covering Premier League matches for Sky Sports, the pair laughed at how Neville had a habit of wildly celebrating his teammates’ goals.

The footage below – courtesy of Sky Sports Main Event – shows Rooney scoring against City in the Manchester derby before Neville runs on the scene.

"That happens a lot with Gaz and that's probably some of the highlights of his career!" 🤣@GNev2 loved joining in the goal celebrations 👏 pic.twitter.com/VFCVHJh2yi

Rooney told Sky Sports: “That actually happened a lot with Gaz and that is probably one of the highlights of his career going to celebrate with other players when they scored!”

You can tell Carragher enjoyed the joke at Neville’s expense.

In 2006, the FA fined Neville £5,000 and warned him about his future conduct following his celebrations after Rio Ferdinand’s late winner against Liverpool, as per The Guardian.

What a moment that was!