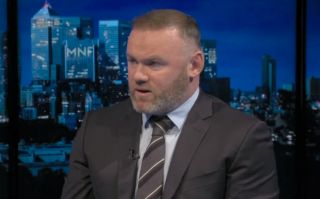 Wayne Rooney hopes that he will one day get to manager one of the two Premier League clubs that are closest to his heart.

The former England international has a huge job on his hands at Derby County, with everything going against him from an admin perspective, and he’s picked up a number of impressive results this season – against the odds!

The 36-year-old grew up supporting Everton and began his career at Goodison Park before joining United, where he spent 13 seasons.

On Monday Night Football, Rooney told Sky Sports: “There are two clubs: Everton and Manchester United. I’m an Everton fan, I was at Man Utd for 13 years. I feel if I keep doing what I’m doing, keep learning, keep improving, those two clubs one day in the future I’d love to manage.

“I understand when Frank Lampard went to Chelsea, it’s so difficult to say no. But when you go into one of these big clubs you need to make sure it’s the right time and you’re able to develop and take that club forward.

“I got approached by Everton to interview for the manager’s job but I’m in a job, I’m still learning and I felt it wasn’t the right time.”

"You wouldn't be ambitious if you didn't set them targets for yourself."

Wayne Rooney says he would love to manage Manchester United or Everton in the future 🔴🔵 pic.twitter.com/Jm0EtheYvT

Hearing a United manager with a Scouse accent would take some getting used to, but Rooney is a legend at Old Trafford and I would like to see him have a successful career in management.

We will see over time if he lands a bigger job than Derby, preferably in the top flight or maybe across Europe.