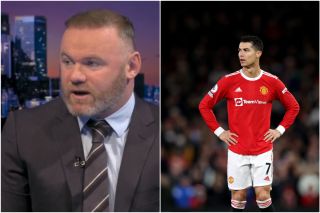 Cristiano Ronaldo’s return to Manchester United has not been a huge success, with the club going its fifth year without a single trophy.

The Portuguese superstar came back last summer and at the age of 37, it shouldn’t be an offence to say he is miles past his best, but he still provided important moments for the team in the Champions League group stages.

There have been questions about his future, especially if United fail to secure a place in next season’s Champions League, and it sounds like Wayne Rooney thinks he should leave.

“You’d have to say no at the minute,” Rooney said on Monday Night Football when asked if the signing has been a success for United.

“I think he’s scored goals, he’s scored important goals in the Champions League early on in the season, he scored the hat-trick against Tottenham, but I think if you’re looking to the future of the club, you have to go with younger, hungry players to do the best and lift Manchester United over these next two or three years.

“Obviously Cristiano is getting on a bit, he certainly isn’t the player he was when he was in his 20s, and that happens, that’s football.

“He’s a goal threat but the rest of the game they need more, they need young hungry players.”

🗣 "He's a goal threat but the rest of the game they need more, they need young hungry players."

Let us know if you agree with Rooney’s assessment of Ronaldo in the comments section.