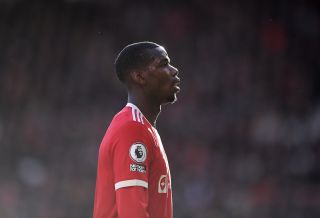 Paris Saint-German have launched their pursuit to sign Paul Pogba as he approaches the end of his contract at Manchester United.

According to the Manchester Evening News, PSG have made an offer to Pogba, but it is understood to be worth less than the final package United offered the midfielder.

The 29-year-old favours a return to Juventus but he is open to joining PSG.

Pogba has remained coy over his future – giving absolutely nothing away – but it is clear from his performances and demeanour that the Frenchman sees his future elsewhere.

On Saturday, Pogba was non-existent in midfield against Leicester City, but it didn’t help that Bruno Fernandes was played as a false nine.

The MEN report adds that sources at United say Pogba is effectively ‘gone’ which raises the question: why on earth is he starting must win matches in the Premier League?

If his head isn’t in the right place, don’t play him. I’d honestly prefer to see some of the youth players in the team who actually want to be out on the pitch, fighting for the badge on their chest.

Of course, it doesn’t help that Pogba’s home was burgled while his two sons were asleep in their rooms on the night United crashed out of the Champions League, although I think a decision to leave was made before that happened.

Does anyone think Pogba will stay at United? Let us know in the comments section.