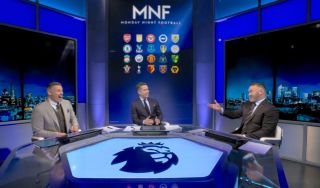 Jamie Carragher joked that Wayne Rooney won’t be getting any players on loan from Aston Villa after the former Manchester United striker claimed Paul Scholes was a better player than Steven Gerrard.

This is one of the debates that pops up quite a bit, yet you won’t find many United fans in disagreement over who was the superior player.

The Derby County manager featured on Monday Night Football to discuss a range of topics, along with former Liverpool defender Jamie Carragher in the studio.

Rooney argued that Scholes should have been inducted into the Premier League’s Hall of Fame ahead of Thierry Henry, with the former midfielder still waiting to be inducted – despite winning 11 Premier League titles throughout his career.

The former United striker said: “Playing with Scholesy for a long time and what he done for you in the team, how he dictated games for the game, I think he is a bit underrated – certainly not with myself or Manchester United fans.”

The conversation kept running and Carragher asked Rooney: “So Scholes ahead of Gerrard?”

This prompted a one-word answer from Wazza, who said: “Yeah.”

Carragher then pointed to Rooney and joked: “No players on loan from Aston Villa!”

Rooney responded: “Well, I haven’t been getting any anyway!”

Best CB to play in the Premier League?

Were you hoping for a call out, @Carra23? 😬🤣 pic.twitter.com/3IxlvFC6hy

This may be a problem for Derby County down the line, along with an array of financial difficulties, but at least Rooney gave an honest response.