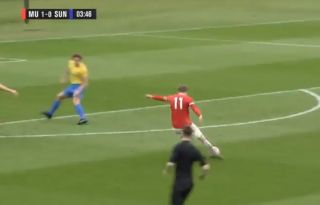 This was United’s second game against Sunderland in as many weeks, having travelled to the north-east on 24 March, only to win 1-0 when Ennis got his name on the scoresheet again.

The young Reds only needed four minutes to take the lead, but unfortunately it wasn’t enough to seal the win, with the match finishing 1-1.

Ennis received a through ball and his first touch allowed him to find space in Sunderland’s half. He eventually reaches the edge of the box before curling his effort into the back of the net.

Ethan Ennis strikes first for United! What a goal! 🔥 pic.twitter.com/jnTpQaKA6I

Early in the second half, Sunderland equalised. Tommy Watkins picked up the loose ball and skipped past Oyedele before making it 1-1.

Next up for the U18s is a trip to Stoke City on Saturday.